If the Big Bang truly was instigated by a malicious act which introduced corruption to the balance that existed before, then perhaps we can pinpoint the exact cause and even find the perpetrator.

This may sound like a very ambitious goal however, with Bible in hand and knowledge of the latest Scientific breakthroughs, chances are we can pull this off.

As we learned earlier, the Universe is dying…. 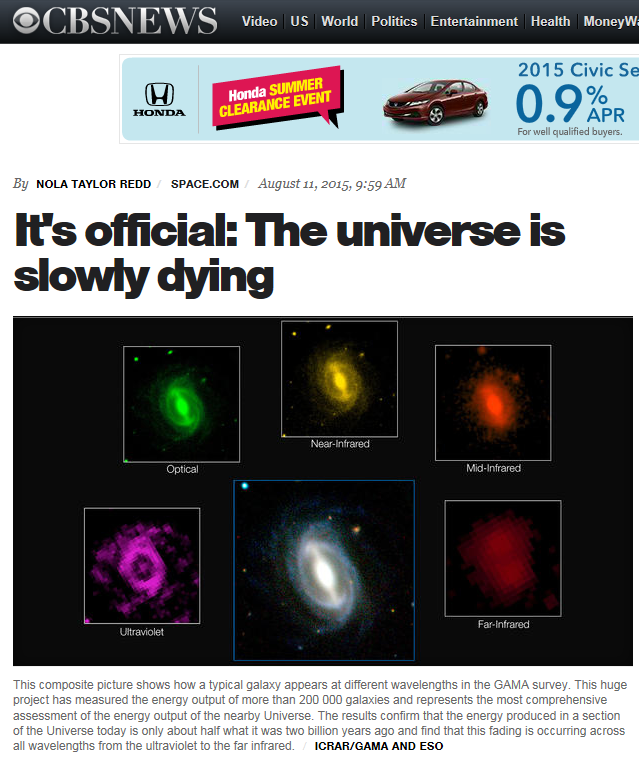 This obviously is terrible news, and the reason it’s dying has to do with something called Dark Energy.

What exactly is Dark Energy? Scientists aren’t sure. It’s one of the greatest unsolved mysteries of the modern world.

We do know this…

Dark Energy is a mysterious force that acts like a type of ‘Anti-Gravity’, pulling and stretching the Universe at an ever increasing rate… 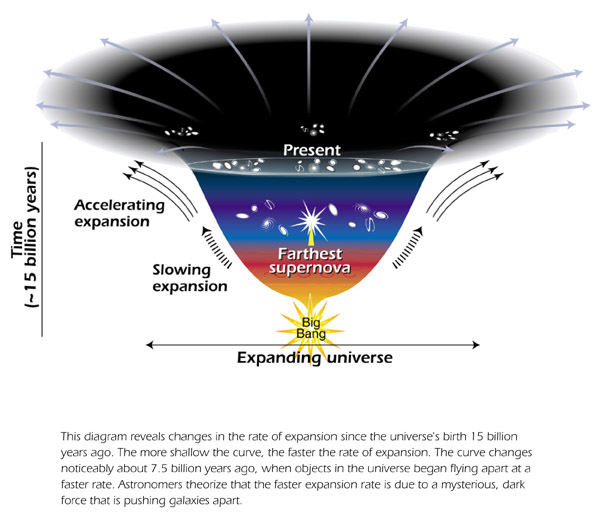 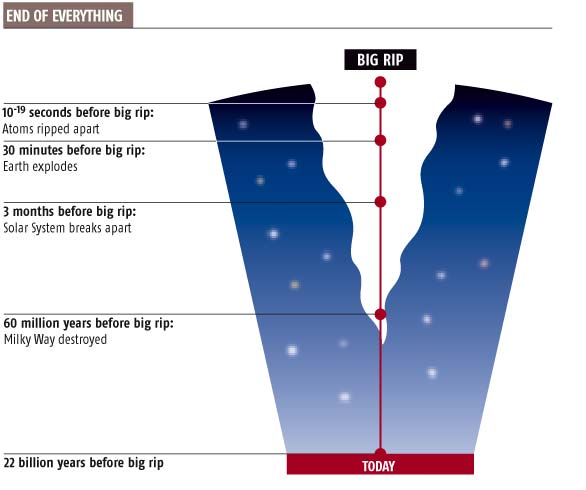 Maybe they should call it the Big Rest in Pieces

Now the mainstream consensus amongst Scholars is that only space itself is expanding and not individual Atoms.

They liken it to raisins suspended in Leavened bread dough… 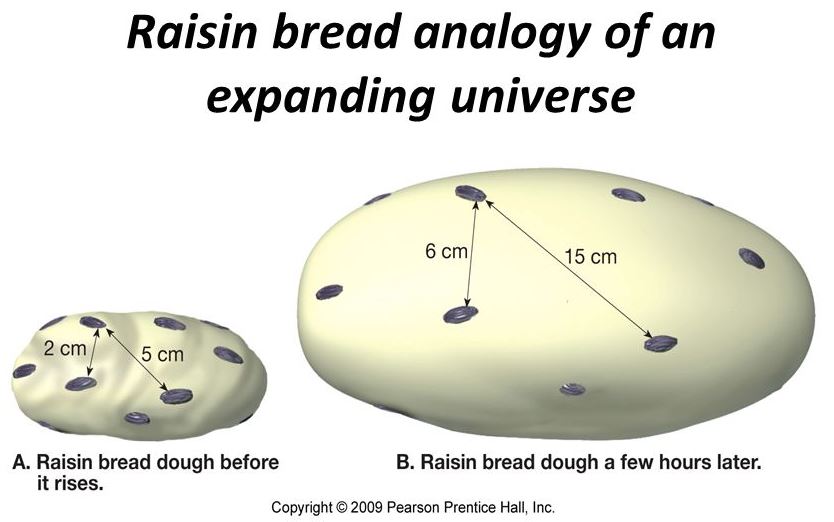 However, this consensus may change.

There are researchers discovering things that are beginning to challenge this assumption.

The Expanding Earth model demonstrates in a very dramatic way how the entire Earth was once a single land mass, but then one day the ‘fountains of the deep’ began to split apart, allowing rain to exist for the first time ever…

“In the six hundredth year of Noah's life, in the second month, the seventeenth day of the month, the same day were all the fountains of the great deep broken up, and the windows of heaven were opened”

Here we see the Nations of the Earth being ‘split apart’ and languages being confounded as yet another piece of evidence for the Expanding Earth theory.

“And the LORD said, Behold, the people is one, and they have all one language; and this they begin to do: and now nothing will be restrained from them, which they have imagined to do”

It would seem that Mystery Babylon’s huge ego is still expanding to this very day.

If all of this turns out to be True, it could mean that even the ‘raisins’ (Atoms) themselves are expanding along with the rest of the Universe, albeit a little more slowly.

Expanding Atoms could even cause Time itself to slow down.

Cutting edge research is now beginning to prove that Time is NOT the constant we once thought it was.

Studies have been done by Bible Researchers demonstrating how millions or even billions of years may have passed in what we now would consider just a few days.

This would explain Scientifically how the Universe and Earth were created in just six days and why some believe that the Earth is roughly six thousand years old.

Obviously, much more research is needed in this area.

So now that we’ve learned a little about Dark Energy and its effects on our existence, we can now look for clues in Scripture to see if there is any mention of it.

In Biblical terms, Dark Energy would essentially be the opposite of Light Energy... 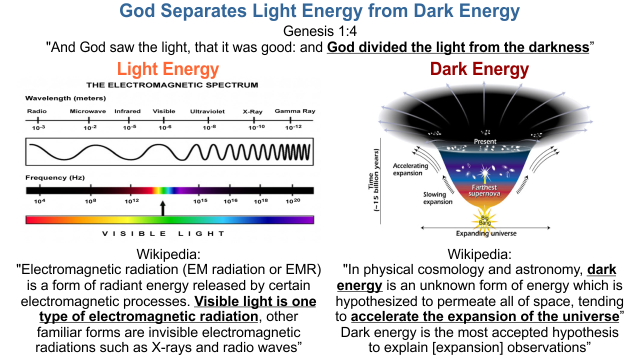 “And God saw the light, that it was good: and God divided the light from the darkness”

So if ‘Light’ is good, does that make ‘Dark’ evil?

That would certainly fit into the fact that Dark Energy seems to be killing the Universe which many would agree is an evil act in of itself.

Here we see Darkness being compared to Evil…

“Woe unto them that call evil good, and good evil; that put darkness for light, and light for darkness; that put bitter for sweet, and sweet for bitter!”

Here we see another example of this…

“But if thine eye be evil, thy whole body shall be full of darkness. If therefore the light that is in thee be darkness, how great is that darkness!”

It’s fairly obvious at this point what the word Darkness means in Scripture.

If we compare Dark Energy to the occult world, we see yet another dark and mysterious aspect to this mystery.

Dark Energy is sometimes referred to as ‘Quintessence’… 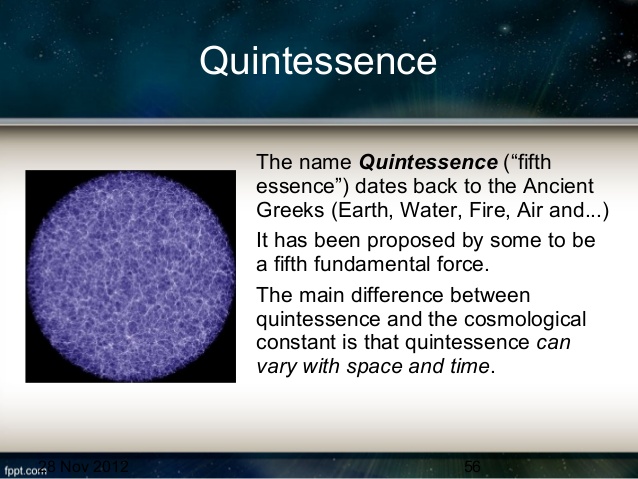 Quintessence is an ancient Alchemy term. The fact that its now being resurrected to describe Dark Energy makes one wonder if Familiar Spirits are at work again.

For you see, Quintessence, in the Alchemy world, is the infamous “Fifth Element”… AKA… Aether.

In ancient Mythology, Aether was considered a Primordial Deity…

“In Greek mythology the primordial deities, sometimes called the Protogenoi ("first-born"), are the first entities or beings that came into existence. These deities are a group of gods from which all others descend. They most notably include Uranus (Father Sky) and Gaia (Mother Earth), who preceded the Titans, who themselves preceded the Olympians”

In some legends, Aether is the “air of the gods”…

“Aether is the personification of the upper air. He embodies the pure upper air that the gods breathe, as opposed to the normal air breathed by mortals”

That verse is referencing Satan by the way.

In other legends, Aether was the son of Darkness. How fitting.

How about this description?

The fifth Orphic hymn to Aether describes the substance as "the high-reigning, ever indestructible power of Zeus," "the best element," and "the life-spark of all creatures"

Let’s not forget the movie… 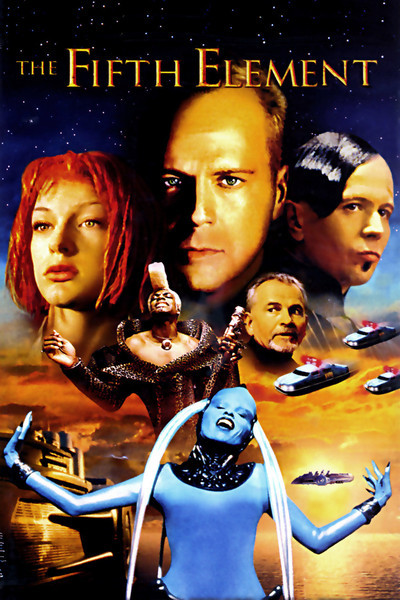 If one were to compare Dark Energy to a more modern concept, it would be how the Oil Industry works.

Oil is Energy. Oil is Power.

Oil is turned into fuel for our automobiles and, in turn, the automobiles turn the fuel into pollution and things that are harmful to our environment.

One could say that Oil, which is actually used as currency in the form of Petrodollars, is inherently evil…

“For the love of money is the root of all evil: which while some coveted after, they have erred from the faith, and pierced themselves through with many sorrows”

“And the second angel poured out his vial upon the sea; and it became as the blood of a dead man: and every living soul died in the sea”

This brings us to its opposite. The Blood of Jesus…

“Much more then, being now justified by his blood, we shall be saved from wrath through him”

Every Christian knows that the Blood of Jesus is related to Power or Energy.

This would be considered Light Energy… 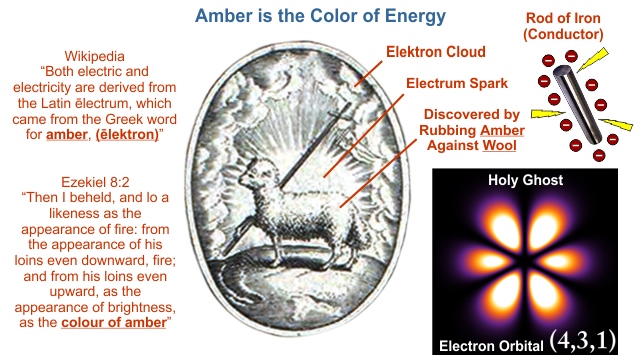 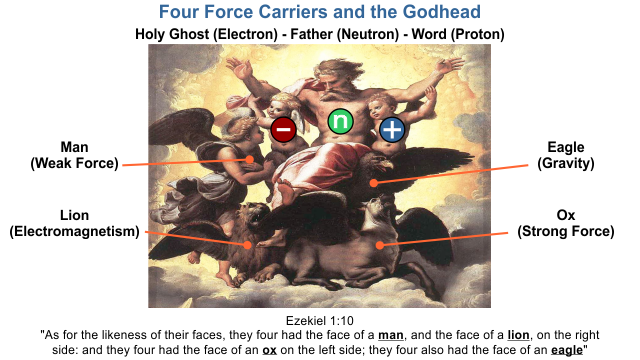 “But unto you that fear my name shall the Sun of righteousness arise with healing in his wings; and ye shall go forth, and grow up as calves of the stall”

How about another comparison?

If one were to compare Dark Energy to living organisms, then Dark Energy would be comparable to Sugar and Carbohydrates. Too much can be very bad for us and make us fat.

Light Energy would be comparable to Electricity that runs throughout our bodies. It is clean and renewable. It’s everywhere.

Sugar and Carbohydrates require the death of a living creature as a ‘sacrifice’ in order to fuel the body, whereas if we Humans were simply ‘Light Beings’ we would only need Light Energy to feed upon.

So what is the point?

If we were to now liken this Dark Energy ‘Sugar’ to the ‘Forbidden Fruit’ introduced to us in the story of Adam and Eve in the Garden of Eden, it may be the evidence we’ve been looking for as to how this whole corruption business got started in the first place. 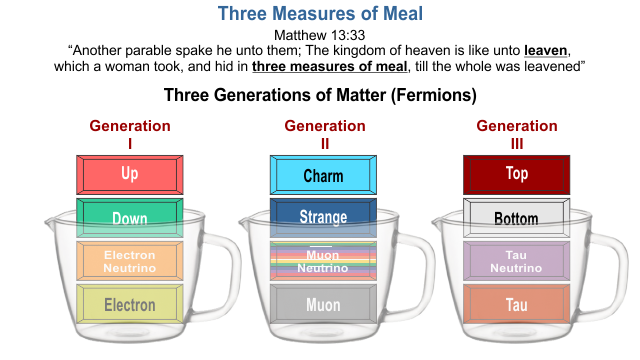 If this is True, then what would the ‘puff them up’ Leaven represent?

Is there some sort of Energy or Particle that ‘puffs things up’? 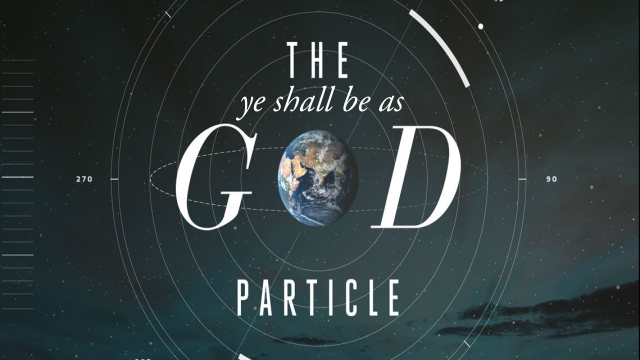 The "Ye Shall Be As God" Particle