Speaking of creating a custom made universe, could God have made a Prototype Universe before he created ours?

One thing we know of for sure is that God created what appears to be a Prototype High Priest. That is to say… a Prototype Jesus…

“Son of man, take up a lamentation upon the king of Tyrus, and say unto him, Thus saith the Lord GOD; Thou sealest up the sum, full of wisdom, and perfect in beauty”

Yes, we are talking about Lucifer here. Look at the words the Bible uses in that verse…

“Full of Wisdom and perfect in beauty”. Contrary to what any stereotypes may be, Scripture makes it crystal clear here that Lucifer was no only incredibly beautiful, he was no dummy either!

"Thou wast perfect in thy ways from the day that thou wast created, till iniquity was found in thee"

Lucifer was perfect, but something happened. What could it have been?

A clue may lie in his ‘coverings’…

“Thou hast been in Eden the garden of God; every precious stone was thy covering, the sardius, topaz, and the diamond, the beryl, the onyx, and the jasper, the sapphire, the emerald, and the carbuncle, and gold: the workmanship of thy tabrets and of thy pipes was prepared in thee in the day that thou wast created”

Notice that when we compare Lucy’s stones to the High Priest’s, we find a row missing… 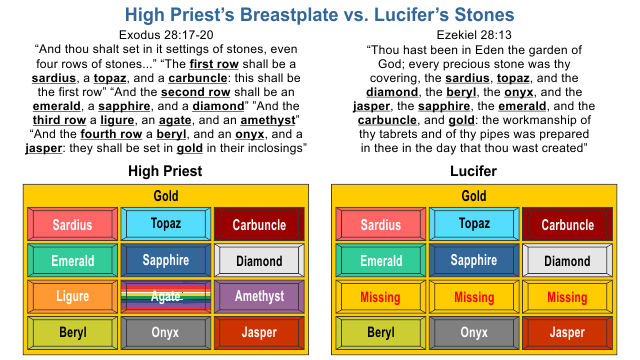 Could this be the so called ‘iniquity’? 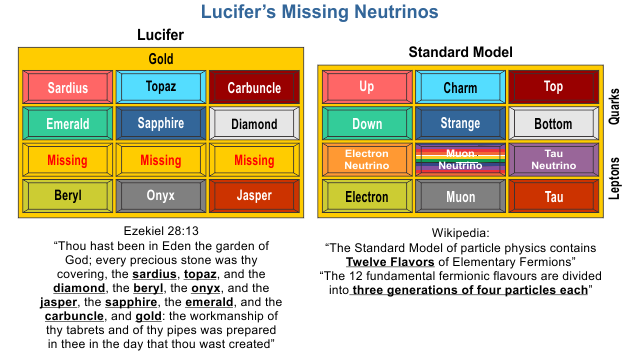 We find that he is missing Neutrinos!

Could God have made a Prototype Universe without Neutrinos? I have no idea… lol, however it is interesting to ponder and the theory deserves to be put out there for thinking minds to investigate further.

Continuing on with this theory, we find ourselves in the Book of Revelation, where as you may have guessed, we will now compare these stones to New Jerusalem. 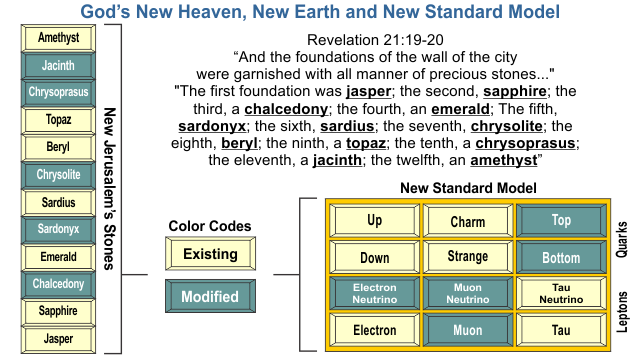 "For, behold, I create new heavens and a new earth: and the former shall not be remembered, nor come into mind"

"Nevertheless we, according to his promise, look for new heavens and a new earth, wherein dwelleth righteousness"

For as the new heavens and the new earth, which I will make, shall remain before me, saith the LORD, so shall your seed and your name remain"

"Then said he unto them, Therefore every scribe which is instructed unto the kingdom of heaven is like unto a man that is an householder, which bringeth forth out of his treasure things new and old"

It would appear that God will create yet another Universe, except this time instead of begin ‘good’, it’s perfect.

So why is knowing all of this important?

A being will arrive on the scene one day and literally try to change the Laws of God and Time itself.

If there is any truth to these theories, we can at least have a glimpse of his plans and perhaps even stop him before he goes too far.

Again, it’s just something I thought I’d throw out there just in case.