Last, but certainly not least in our Trinity comparison is the Neutron or the Father. Let’s see if we can find some verses describing God to see if it matches a Neutron shall we?

"One God and Father of all, who is above all, and through all, and in you all"

“For of him, and through him, and to him, are all things: to whom be glory for ever. Amen”

Another good one. All things really means all things.

“And he is before all things, and by him all things consist”

All things consist of Atoms. Too easy, I know.

Perhaps another way of looking at this is that Neutrons are what hold the Atoms together.

"He existed before anything else, and he holds all creation together"

There are so many verses describing the Godhead as an Atom, that they simply can’t all be listed here.

For by him were all things created, that are in heaven, and that are in earth, visible and invisible, whether they be thrones, or dominions, or principalities, or powers: all things were created by him, and for him:

In the following verse, we see that Jesus is Truth and God is Love…

“Grace be with you, mercy, and peace, from God the Father, and from the Lord Jesus Christ, the Son of the Father, in truth and love”

Could the Neutron have something to do with Love?

"And we have known and believed the love that God hath to us. God is love; and he that dwelleth in love dwelleth in God, and God in him"

Again, we see God is Love. In fact, Scripture teaches us that God's Love is unconditional... it simply Loves.

Some say Love is a vibration. Think of the Atom and how it selflessly exists, doing what it does, vibrating and spinning its particles... over and over again... for us.

Does God’s Unconditional Love take sides? No. Therefore God’s Love is Neutral. It cares not who it loves, it just does.

Get it? Neutral… Neutron?

How can one get to Unconditional Love? One must pass through the Proton...

"Jesus saith unto him, I am the way, the truth, and the life: no man cometh unto the Father, but by me"

In other words, you better be on Jesus's 'good side'. He's a sort of Gatekeeper.

Thus the Neutron is “Neutral”, like a Judge. What does a Judge do? A Judge listens to the Positives (Protons) and the Negatives (Electrons) of life and all is judged accordingly.

“Arise, O God, judge the earth: for thou shalt inherit all nations”

Sometimes Unconditional Love sacrifices itself for the greater good. An interesting fact about the Neutron is that it is the only Sub-Atomic Particle that can give birth to a Proton and Electron.

This is called Beta Decay. It’s much like the ancient legend of the Phoenix… 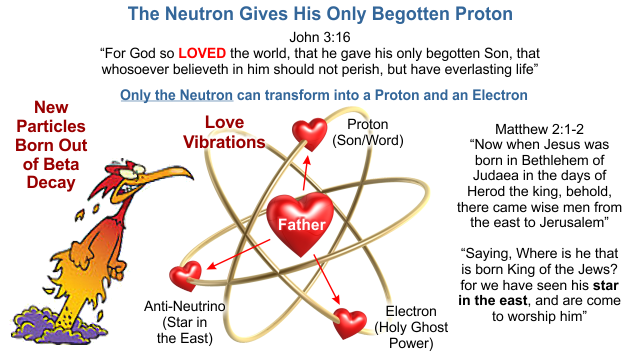 The Proton truly is the Father of all… and yes… Love exists even in the Sub-Atomic world.

Just to give a Double Witness, let’s be sure a Proton can never decay into a Neutron…

“The transformation of a free proton to a neutron (plus a positron and a neutrino) is energetically impossible, since a free neutron has a greater mass than a free proton”

But wait a minute… can Jesus (Proton) ever become a Father (Neutron)? He can with some help…

Did you see that? When the Proton wants to become a Neutron, he simply needs to receive the Holy Ghost!

Note that when Jesus the Proton is born, another particle called an Anti-Neutrino is also born. Could this be related to the Star of Bethlehem?

When Supernovas occur, they produce massive amounts of Neutrinos. Could this be the sign the Astronomers of the time, called Magi or Three Wise Men, observed in the Heavens?

Note that the Anti-Neutrino is Anti-Matter, or another way of putting it, Anti-Matter is the Unholy Trinity. In our next study we will cover Anti-Matter in depth.

So, does this mean the Star of Bethlehem was some sort of ‘evil’ sign because it produced Anti-Matter? Here is what Wikipedia has to say about that…

“Among Jehovah's Witnesses the Star of Bethlehem is seen as a product of Satan, rather than a sign from God, since the star led the astrologers to Jerusalem where they met King Herod's plan to kill Jesus”

Again, more evidence of the Neutron being the Father Particle.

Scientists know that the total Electrical Charge of the Neutron is ‘0’.

It’s interesting that Tarot Cards begin with number ‘Zero’, or The Fool. That is because The Fool is about to leave God (0) behind and take the “Fool’s Journey”… 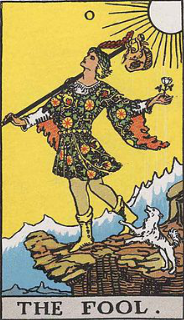 Speaking of a Fool’s Journey, Let’s talk about Nuclear Power for a moment.

We’ve all heard about Nuclear Power. The neutron is essential to the production of nuclear power and weaponry.

Pay attention to how quickly this happens. The flesh consumes away ‘as they stand’! That’s fast!

Now that verse could also be describing an Anti-Matter weapon as well.

We will cover more on Atomic Weapons later.