Ezekiel 9 is another important key in understanding the Mark of the Beast and how it relates to Genetic Engineering.

Now that we’ve seen how the Temple, a picture of the Human Body, has become corrupt with all kinds of DNA tampering, the time has now come for God to exterminate the contamination.

Although it’s an awful thing to have to do, unfortunately, it’s the only solution left. God has no choice now but to separate GMO from Non-GMO and sterilize accordingly.

Enter the ‘Man with the Inkhorn’...

“And, behold, six men came from the way of the higher gate, which lieth toward the north, and every man a slaughter weapon in his hand; and one man among them was clothed with linen, with a writer's inkhorn by his side: and they went in, and stood beside the brasen altar”

The Man with the Inkhorn is dressed in Linen. Linen is generally a picture of a Divine DNA Upgrade and is usually associated with the color white to convey Purity.

The word Inkhorn is another wonderful KJV translation that tells a bigger story than one would normally find in other translations.

Ink can be looked at as ‘words’ that are written or about to be written. Think Adenine, Guanine, Cytosine and Thymine. The container for the A, G, C & T is a ‘horn’, like that of an Ox or Ram.

Since the Nitrogenous Bases of A, C, G, & T are associated with ‘Sky’ as well as the ‘Seven Spirits’ of the ‘Breath of Life’, it is only natural that we find that the ink is contained in an instrument that is also used to blow Air through in order to create sound… 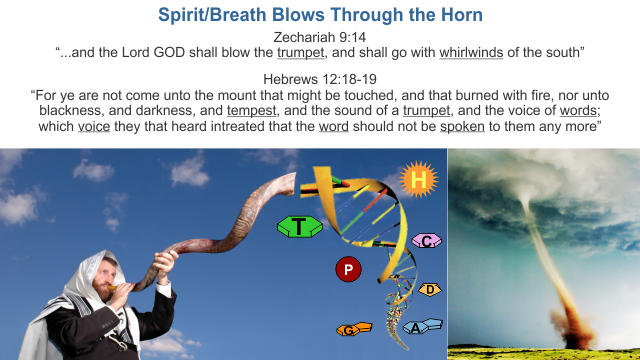 As we look towards The Most Holy Place of DNA, the Chromosome and the Ark of the Covenant, we see a sad sight…

“And the glory of the God of Israel was gone up from the cherub, whereupon he was, to the threshold of the house. And he called to the man clothed with linen, which had the writer's inkhorn by his side”

As God leaves the Ark, the Man Clothed in Linen is told to alter the DNA of the believers…

This DNA modification is the exact opposite of the Mark of the Beast/666.

This is the Seal of God! 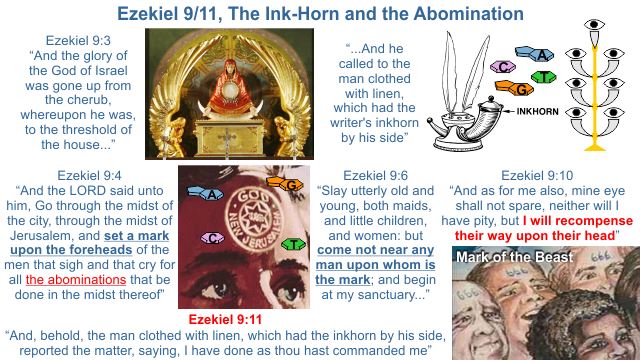 After this is done, the rest of the people meet a terrible fate and are destroyed.

Next we see something occur that is truly an amazing treasure of Scripture. The Man with the Inkhorn begins to engage in what can only be described as a type of ‘Un-Holy’ Genetic Engineering!

I say Un-Holy because this act has more to do with Wrath than anything else...

"And as for me also, mine eye shall not spare, neither will I have pity, but I will recompense their way upon their head"

Recompensing their way upon their head sounds a lot like the Mark of the Beast.

As we’ve learned earlier, the Ark of the Covenant is covered by Lucifer, the Cherubim, who is a representation of our Phosphorus (Stones of Fire) DNA Strands and decorated with all kinds of beautiful Stones or Nitrogenous Bases…

“And he spake unto the man clothed with linen, and said, Go in between the wheels, even under the cherub, and fill thine hand with coals of fire from between the cherubims, and scatter them over the city. And he went in in my sight”

The Man with the Inkhorn is using the Phosphorus and possibly even some Base Pairs, to scatter over the city… 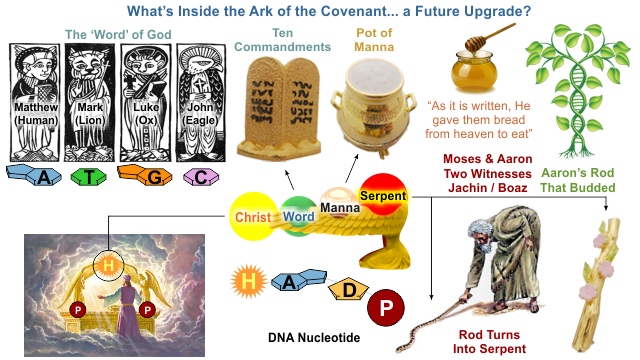 After this, the Chrubim leave the Temple…

“Then the glory of the LORD departed from off the threshold of the house, and stood over the cherubims. And the cherubims lifted up their wings, and mounted up from the earth in my sight: when they went out, the wheels also were beside them, and every one stood at the door of the east gate of the LORD'S house; and the glory of the God of Israel was over them above”

Chapter-39: Parable of the Two Eagles