Zechariah 6 brings us back to the preview of the Four Horsemen of the Apocalypse described in Revelation. Are they the same or is there a difference? Let’s look into this a bit further.

Here we see Four Horses and Chariots, fitting the description of the ones in Revelation, arriving from between two mountains of Brass. Why two mountains and why Brass? Could this have something to do with Ezekiel’s vision of the Whirlwind and the Four Living Creatures with ‘feet of Brass’?… 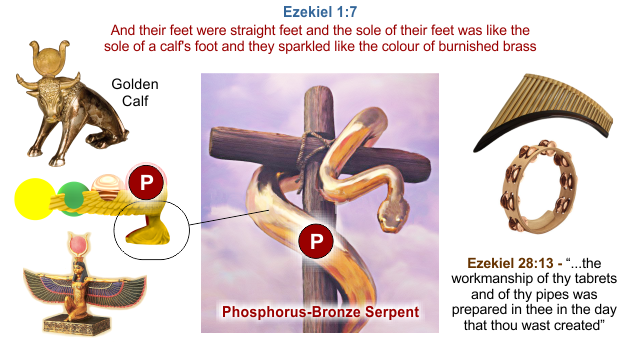 Mountains are also where the Harlot sits. Could these mountains be related to the Seven Lamps on the Candlestick of DNA and the Ark?…

“And here is the mind which hath wisdom. The seven heads are seven mountains, on which the woman sitteth”

If we read just a bit further, we find that these Four Horses are Four Spirits of the Heavens…

This is a definite match to our Four DNA Base Pairs and Two Witnesses. The language matches earlier passages…

“Then said he, These are the two anointed ones, that stand by the Lord of the whole earth”

We can now place these elements into our theoretical Alchemical perspective… 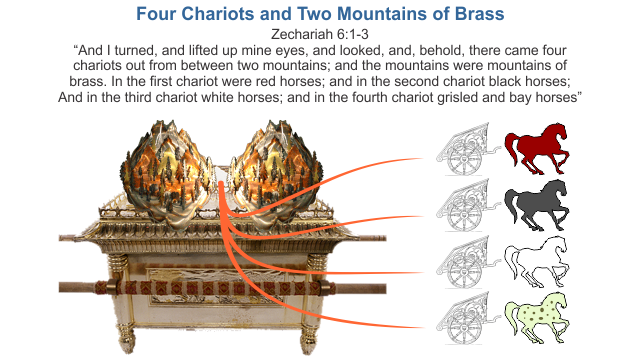 Once we link Chariots to the passages, we see an even clearer picture emerge… 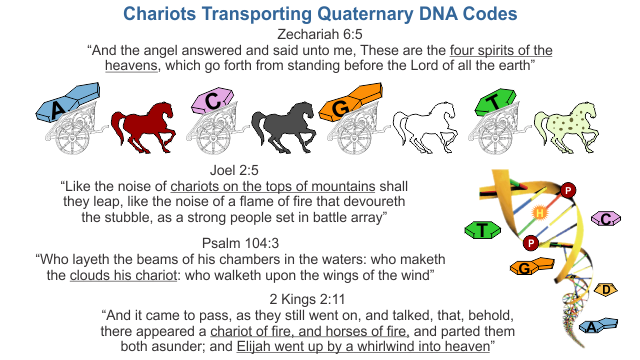 Chariots are known to transport people into Heaven via Whirlwinds. What else can we link them to? 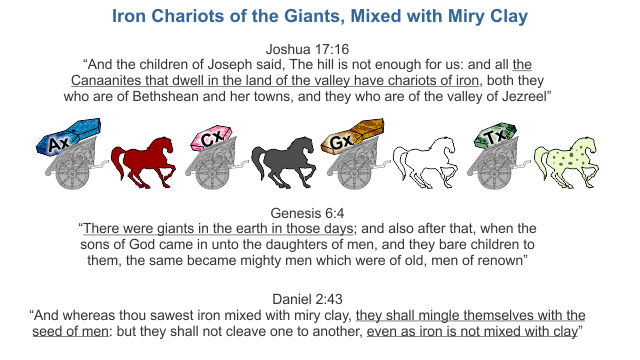 Seems Giants have DNA Transporting Chariots as well, except there’s a difference. The Giant’s Chariots are made of Iron!

What does this mean?

“And whereas thou sawest iron mixed with miry clay, they shall mingle themselves with the seed of men: but they shall not cleave one to another, even as iron is not mixed with clay”

Note that these Horses go in the Four Cardinal Directions of North, South, East and West…

Another indication that this is meant to be interpreted similar to Ezekiel’s Whirlwind vision.

We are almost there. As GMO spreads across the planet, it’s only a matter of time before we see GMO humans and a return of the Nephilim.

Since the Horses represent ‘Spirits’, we may soon see the long forgotten disembodied spirits of the Giants return once again into flesh bodies. 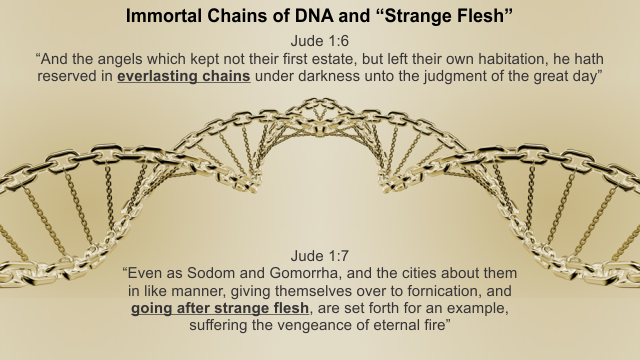