We finally get to see some good news.

In Revelation 19, we see an amazing preview of our new home and upgraded DNA Spiritual Bodies…

“Let us be glad and rejoice, and give honour to him: for the marriage of the Lamb is come, and his wife hath made herself ready”

“And to her was granted that she should be arrayed in fine linen, clean and white: for the fine linen is the righteousness of saints”

We are the body of Christ. Our corrupt DNA is made new again and we all join together as one in a place called New Jerusalem.

Who is New Jerusalem?

As we learned earlier, Foursquare is Quantum Code for the Fourth Dimension…

“And I saw a new heaven and a new earth: for the first heaven and the first earth were passed away; and there was no more sea”

“And I heard a great voice out of heaven saying, Behold, the tabernacle of God is with men, and he will dwell with them, and they shall be his people, and God himself shall be with them, and be their God”

“And God shall wipe away all tears from their eyes; and there shall be no more death, neither sorrow, nor crying, neither shall there be any more pain: for the former things are passed away” 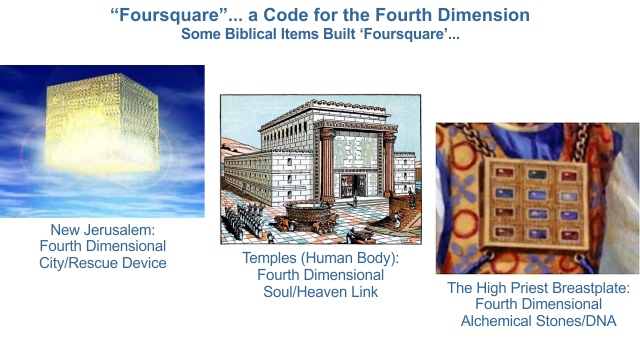 That verse is describing a Tesseract… 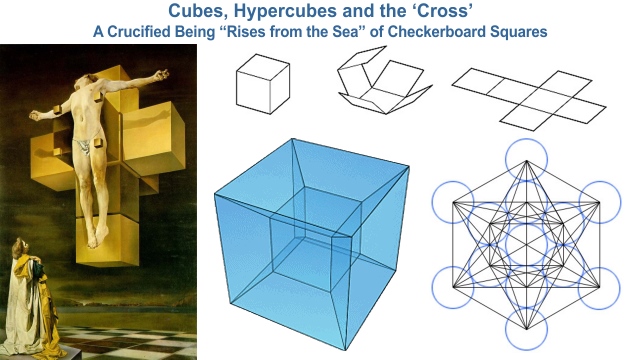 As you can see… the Gnostics are all over that one. Notice the ‘Cross’? Interesting eh?

New Jerusalem is built with Twelve Stones. These stones represent the Twelve Tribes of Israel (you and I) which, as we learned, are also a representation of a 12-Base DNA construct...

“And the foundations of the wall of the city were garnished with all manner of precious stones. The first foundation was jasper; the second, sapphire; the third, a chalcedony; the fourth, an emerald”

“The fifth, sardonyx; the sixth, sardius; the seventh, chrysolite; the eighth, beryl; the ninth, a topaz; the tenth, a chrysoprasus; the eleventh, a jacinth; the twelfth, an amethyst”

“And the twelve gates were twelve pearls; every several gate was of one pearl: and the street of the city was pure gold, as it were transparent glass”

“And I saw no temple therein: for the Lord God Almighty and the Lamb are the temple of it” 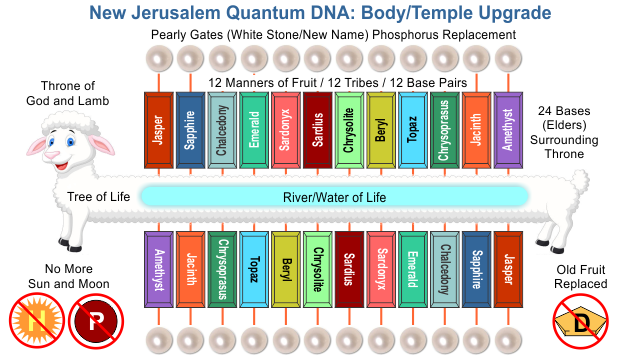 The Center Hydrogen Bonds have been replaced with the Lamb…

“And he shewed me a pure river of water of life, clear as crystal, proceeding out of the throne of God and of the Lamb”

“In the midst of the street of it, and on either side of the river, was there the tree of life, which bare twelve manner of fruits, and yielded her fruit every month: and the leaves of the tree were for the healing of the nations”

And there you have it! We have reached the end of this journey.

I hope some of this information has resonated with you.

Maybe one of you can take this baton and run it further through time and space to improve on the theories.

Speaking of theories, remember… don’t take anything I say as Truth until you research it for yourselves and verify…

"God forbid: yea, let God be true, but every man a liar; as it is written, That thou mightest be justified in thy sayings, and mightest overcome when thou art judged"

Thank you for reading this presentation. God Bless!