In order to fully appreciate the Power of Pattern Recognition in Scripture, God has blessed us with a revolutionary concept called the Godhead…

The Godhead or ‘Holy Trinity’ as some call it, is the main KEY to unlocking the deeper meanings of verses.

The concept of the Father, Word and Holy Ghost is embedded throughout the entire Bible. Without this KEY, one may never see this Trinity Message and be desperately lost.

It is no wonder that 1 John 5:7 has been censored from just about every Bible since the 1611 King James Version.

The last thing the Rulers of Darkness of this world want is an Enlightened Christian.

Critics claim that 1 John 5:7 was somehow ‘slipped in’ to the KJV as some sort of ‘deception’. As you will soon see, their false claims fall apart rather quickly.

The following is a growing list of how the Father, Word and Holy Ghost are capable of decrypting verses, demonstrating the Word of God at every conceivable Scale of Measurement!

First and foremost is the Heaven and Earth connection…

"And there are three that bear witness in earth, the spirit, and the water, and the blood: and these three agree in one"

At least the newer translations get that part correct for the most part.

Throughout this presentation will be graphic slides to help aid in the understanding of the Godhead and how it relates to Bible symbology.

This one for example… 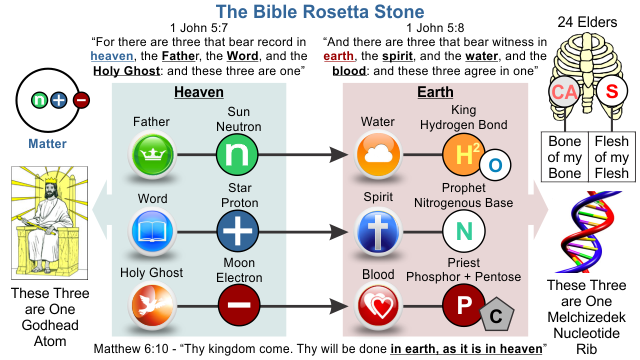 …illustrates how the Heavenly Godhead relates to symbolic yet physical/tangible objects in our current version of reality.

We will cover these concepts in great detail as we move forward and show why they are connected in that particular manner.

Notice how the corresponding symbols are at differing scales to one another?

The Sun is very large, while the Neutron is very small, yet they both represent the same concept… which is the ‘Father’.

"Their line is gone out through all the earth, and their words to the end of the world. In them hath he set a tabernacle for the sun, which is as a bridegroom coming out of his chamber, and rejoiceth as a strong man to run a race"

A Prophet or Man is big in comparison to a very tiny Nitrogen Nucleobase of DNA, yet again… they both represent the Word of God.

Do you see the connections?

The “Word Made Flesh” begins as a Nucleobase of DNA (Prophet) which becomes a Tabernacle (Biological Cell) for the Sun (the Father).

A Sun eventually dies, and is then resurrected as a Neutron Star.

Nitrogen is the main component of each ‘Word of God’ or Nucleobase of DNA (ie. A, C, G, T).

Take a look at that slide again. Notice how they all perfectly connect?

Is this Divine Inspiration or mere coincidence?

Again, these are typical of the patterns one will find all throughout Scripture once one has the Secret Godhead Decoder Ring!

Be sure and keep this list handy as we go along and see what interesting connections you can discover.

Combined = Midst of the Garden of Eden

Note that this is just a small sample of the many relationships in Scripture.