We just described Matter, but what about Anti-Matter? Is there an “Anti-Godhead”?

The corresponding Anti Sub-Atomic Particles are… 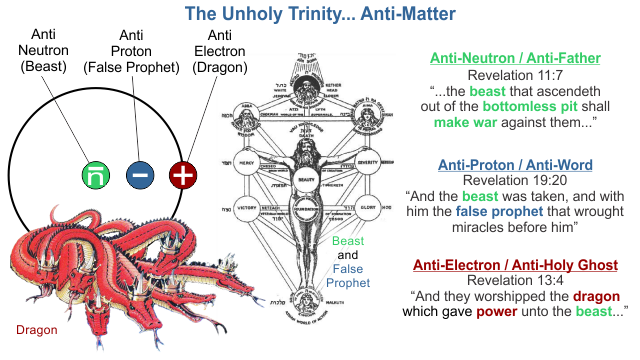 And just like Matter, Anti-Matter has many verses to back it up as well. In fact, the verses contain many of the same descriptors (like Power for instance) and share strikingly similar concepts.

Now, in case you are wondering why there is a Sephirot in that particular slide, stay tuned. We will cover that in a future study. For now, just know that the man being depicted there is non-other than the Anti-Christ. He is called Adam Kadmon by Kabbalists…

Let’s start with the Anti-Nucleus, or the Beast and False Prophet. In order to understand them, we must first learn a little bit about where they come from.

Earlier we learned about Height and Depth being related to the Future and the Past.

Here’s where things get interesting. The Depth of the Sea and Earth are where the Beast (Anti Neutron) and False Prophet (Anti-Proton) come from.

Beast = From Depth of the Sea

False Prophet = From Depth of the Earth

Here is a verse describing the Beast…

This is the Anti-Father, or Anti-Neutron, made of many Heads, Crowns and Horns.

This Beast comes up out of Depth of the Sea, the direct opposite of the Father who is in the Height.

Some day, God’s Children will be together with him in the *future*. The opposite of that, the Beast, wants us all to go back to the *past* and be under the curse of the Law.

Again, this is the Sephirot with Adam Kadmon as the Anti-Christ. The Jewish Mystics that created that image drew their inspiration from that verse. It is very wicked. Many occultists are unaware of this fact and blindly worship this Beast.

“I know thy works, and tribulation, and poverty, (but thou art rich) and I know the blasphemy of them which say they are Jews, and are not, but are the synagogue of Satan”

Here is a verse describing the False Prophet…

This is the Anti-Proton or Anti-Christ, speaking as a Dragon. It is literally the Anti-Word of God! False Prophet is a very fitting title as well. 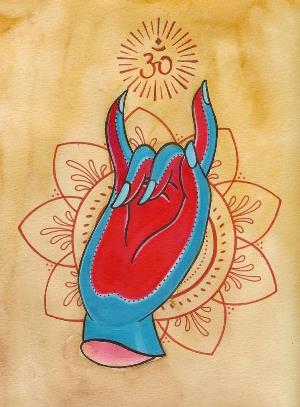 That completes the Anti-Nucleus. What about the Anti-Electron?

Remember that the Electron gives Electricity or Power as the Holy Ghost. This would mean that the Anti-Electron should be similar…

Look at that. The Dragon *gave* the Beast its Power. Dragon Power!

How about another Witness…

“And the great dragon was cast out, that old serpent, called the Devil, and Satan, which deceiveth the whole world: he was cast out into the earth, and his angels were cast out with him”

The Dragon was ‘Cast out’… which is the opposite of descended… another “Anti” reference.

Note that his Angels (Anti-Protons) went with him.

Here is the Dragon (Satan) being compared to lightning…

“And he said unto them, I beheld Satan as lightning fall from heaven”

Lightning is of course a form of Power and just recently Scientists have discovered Anti-Electrons (Positrons) originating from them! 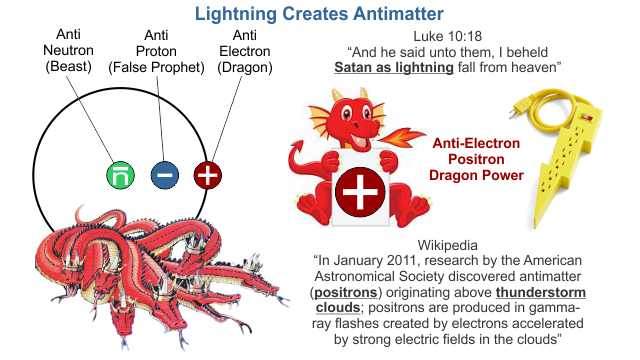 In another amazing verse, we see the Serpent and Dove compared in contrast to one other…

“Behold, I send you forth as sheep in the midst of wolves: be ye therefore wise as serpents, and harmless as doves”

Finally, when we combine all three particles together, we get the Atom’s Evil Twin… The Unholy Trinity.

There is even an Anti-hydrogen…

Ever heard of Anti-Matter Man?

“The powers of the Anti-Matter Man were very strange and unpredictable. Because of his antimatter body he could not touch positive material from our universe, at the risk of causing explosions”

Explosions eh? Antimatter Weapons are considered to be the ultimate when it comes to mass destruction. They haven’t been invented yet.

Did I say yet?