It's time to talk about Alchemy.

Because we are dealing with CERN and all of its incredible Occult Symbology, it is only fitting that we take a moment here to contrast these two topics and look for any correlation.

If anyone is going to be handed the 'keys to the Bottomless Pit’, it would most certainly be our Tower of Babel friends at CERN...

"And the fifth angel sounded, and I saw a star fall from heaven unto the earth: and to him was given the key of the bottomless pit"

And if the ultimate goal of the Elite's is to accomplish the "Great Work" of becoming "Gods", then the strange Occult world of Alchemy is where we should be looking.

When studying Alchemy, one will often hear buzzwords like...

It's a complicated subject, but thankfully the main teaching in Alchemy can be 'distilled' down to a concept called SALT + SULFUR + MERCURY.

...who got the ball rolling on the SULFUR + MERCURY portion of the equation.

It was then expanded to include SALT by Swiss Alchemist Paraclesus in his "Opus Paramirum" dating to about 1530...

Paraclesus has this to say about the Alchemical Trinity...

"Sulfur embodied the soul, (the emotions and desires)"

"By understanding the chemical nature of the tria prima, a physician could discover the means of curing disease"

Note that he calls it ‘Tria Prima’, or the ‘Three Primes’.

Here is another version from Paracelsus...

"The three primal alchemical properties and their correspondence in spagyric remedy are:"

As we will soon see, that last one matches Scripture almost perfectly.

This "Tria Prima" has evolved over the years to include all kinds of interpretations.

Familiar Spirits have no doubt been the guiding force in all of this.

Two very popular interpretations that can be found all over the Internet today involve the Trinity concept of Man + Woman + Child.

Perhaps the most popular is this version...

However, since we here at Most Holy Place use Scripture to discern all matters, we have found that the following version fits the Word of God more accurately...

...which coincidentally happens to fit with the Paracelsus model of Earth/Fire/Water

We cover this in more detail in "DNA: The Most Holy Place", but as we can see, the last part of the Trinity... Mercury, would represent the "Child".

More specifically, Mercury would be the Occult equivalent to the "Rex Mundi" or "King of the World" or even "Word Made Flesh"... a future long awaited Messiah figure that the entire world will worship one day.

Like a Beast rising out of the Waters or Sea of Mercury... 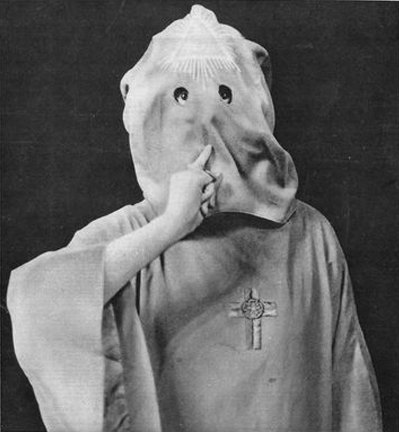 So what are some of the ways Tria Prima compares to Scripture?

The Magnum Opus version gives us some interesting clues...

Albedo: A whitening or leucosis

Rubedo: A reddening, purpling, or iosis

Nigredo: A blackening or melanosis

Where have we seen those colors before?

In the Book of Revelation... 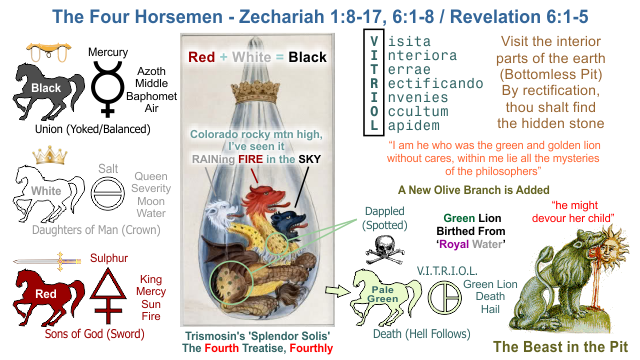 Because these interpretations come from Scripture and not Mankind’s ‘imagination’, the slide you are looking at is most likely closer to the True interpretation of these Elements than most of what one would find on the Web or in ancient Alchemy books.

In fact, our Interpretation of the Alchemical Trinity is closest to the one chosen to be the symbolism in the Masonic Chamber of Reflection... 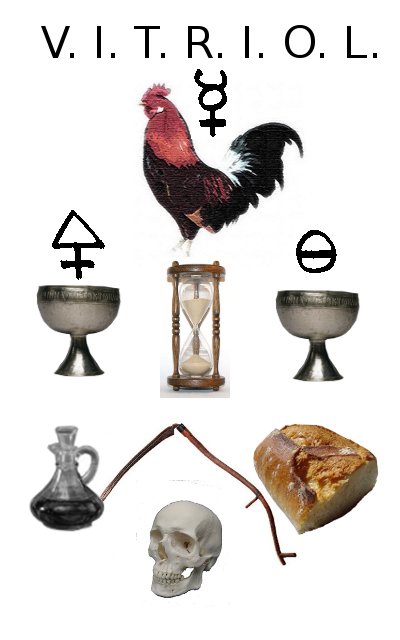 ...which is all the more reason to take this study very seriously.

Can you see the Four Horsemen symbology here? 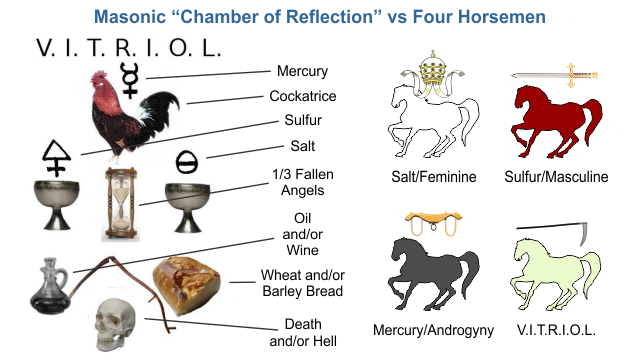 From the looks of it I would say one third are fallen... 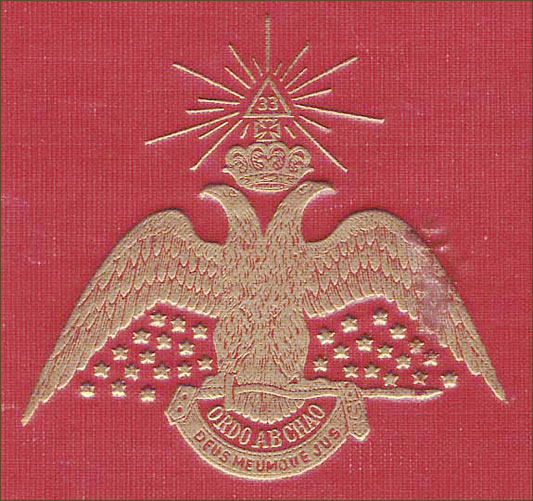 Keep that Cockatrice in mind as we go along.

Without getting into too much detail here, these symbols within the context of the Masonic Chamber of Reflection can also be compared to the Hegelian concept of "Thesis" + "Antithesis" + "Synthesis" sometimes called "Problem + Reaction + Solution"... 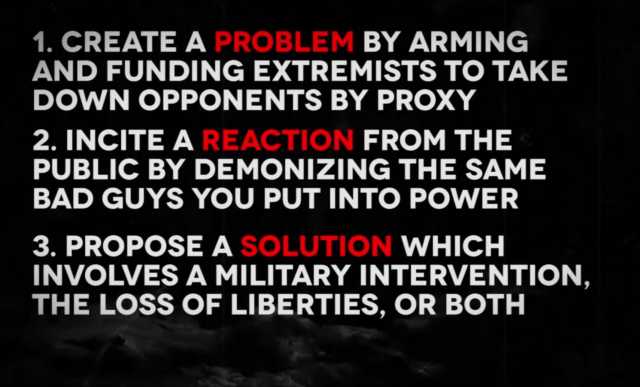 In other words, in order to be a Top Elite, one must learn the "Fine Art" of Nation Building Alchemy...

Sulfur = Red Horse = A Reaction takes place to the Problem.

Mercury = Black Horse = A Pre-prepared "Solution" (involving Union/Joining/Synthesis) is suggested and promoted as the ultimate answer to the Problem.

What are some of the other clues we can on find Tria Prima in Scripture?

We will start with 'Salt' or the 'Feminine Principle' of "Daughters of Men".

One of the strangest transformations in the Bible involves Lot's Wife at Sodom and Gomorrah...

"But his wife looked back from behind him, and she became a pillar of salt"

She literally turned into a Woman of Salt (WOS) as she looked back towards the ruined cities... 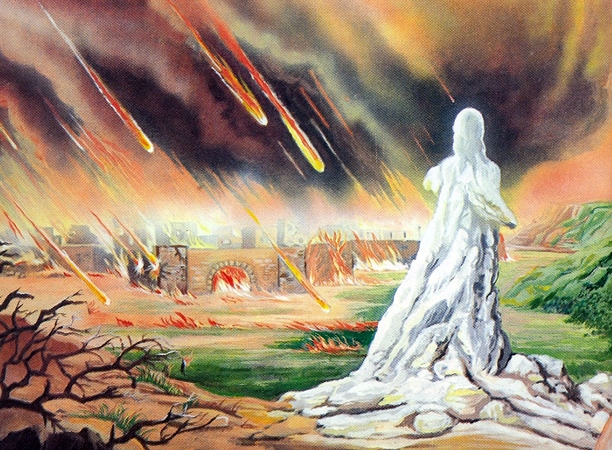 Oh my. It doesn't get any more obvious than that! Salt is definitely a Feminine Principal.

And how were the Cities ruined?

The Bible calls it Brimstone...

The Sulfur rained down from Heaven, like the Fallen Sons of God mingling with the Daughters of Men.

Note that Sulfur is yellow in its natural state, however when combined with fire or high temperatures, it turns Red, hence the Red Horse.

Here is another witness of Salt and Sulfur joining together...

"And that the whole land thereof is brimstone, and salt, and burning, that it is not sown, nor beareth, nor any grass groweth therein, like the overthrow of Sodom, and Gomorrah, Admah, and Zeboim, which the LORD overthrew in his anger, and in his wrath"

It would appear that Salt and Sulfur truly are a representation of the Sons of God mingling with the Daughters of Men.

And look at the outcome of this Union.

Giants were born unto them!

Those Giants would be the equivalent to Mercury, sometimes called Hermes the "Child", in our Alchemical Trinity... 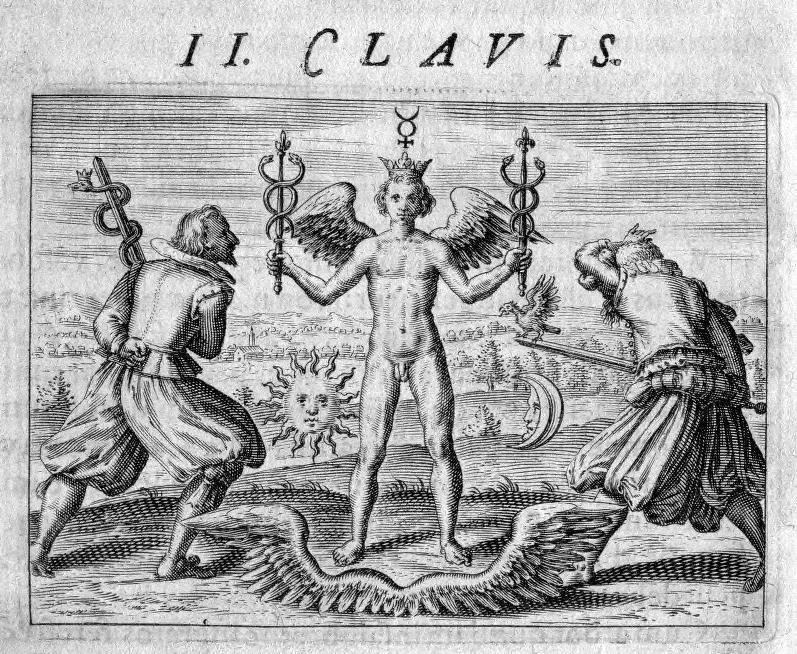 Is that a Rooster I see?

The Rooster is one of Mercury’s symbols (think Son of the Morning and Phoenix).

The ‘Fruit’ (Child) is the Fiery Flying Serpent or Mercurius... The union of the two...

How art thou fallen from heaven, O Lucifer, son of the morning! how art thou cut down to the ground, which didst weaken the nations!

In this amazing verse we see the connection...

"Rejoice not thou, whole Palestina, because the rod of him that smote thee is broken: for out of the serpent's root shall come forth a cockatrice, and his fruit shall be a fiery flying serpent"

Of course the obvious symbol here is DNA.

Mercury thus represents the False Word of God made flesh... which ultimately is what all of this is about... creating the Image of the Beast.

Isaiah 14:29 can be clearly seen in this Esoteric Card with the Broken Rod of the Caduceus (DNA) issuing forth a Double Headed Cockatrice... 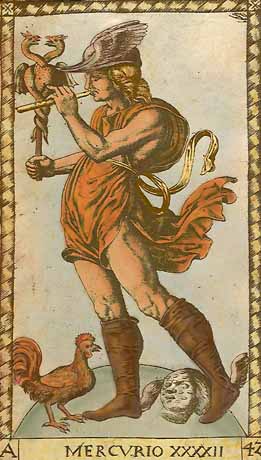 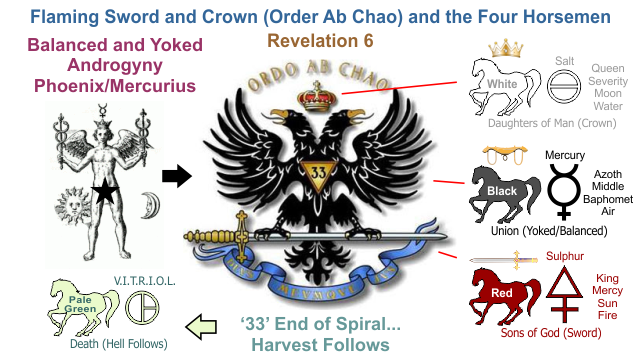 Something else worth noting here is that Mercury (AKA Hermes) is sometimes merged with the Egyptian God Thoth.

This syncretic combination is referred to as “Hermes Trismegistus”... 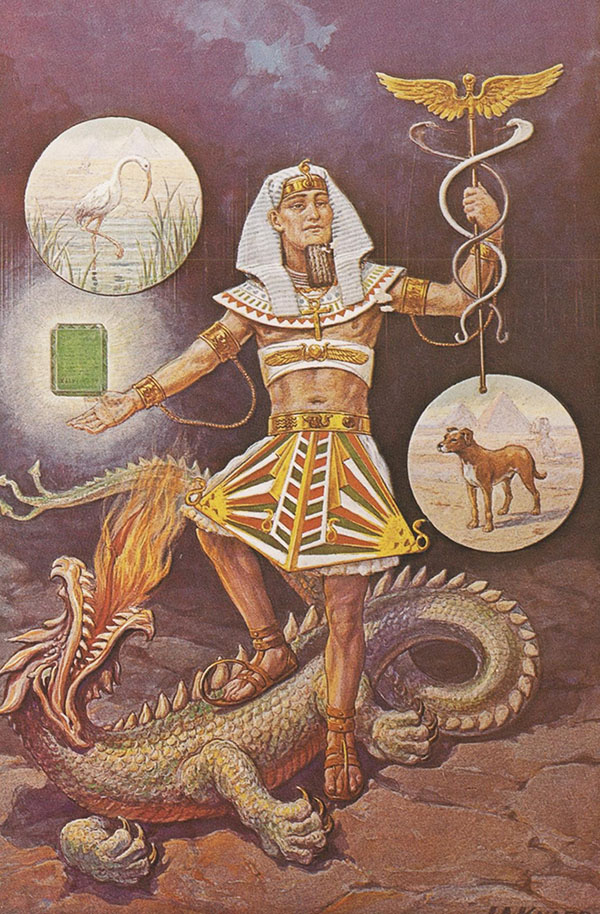 Hermes Trismegistus is regarded as a Superhero in the Occult World.

Let’s apply that to our Bible Rosetta Stone...

Jesus is of the Order of Melchizedek...

“The LORD hath sworn, and will not repent, Thou art a priest for ever after the order of Melchizedek”

Could Hermes Trismegistus represent a type of Anti-Christ?

Mercury is known for flying through the Air like a Prince...

Isn’t it interesting that Jesus himself references a Cock (Rooster) using the word Thrice in several very profound verses? When the World denies Jesus three times, the Thrice Greatest will crow...

“Jesus answered him, Wilt thou lay down thy life for my sake? Verily, verily, I say unto thee, The cock shall not crow, till thou hast denied me thrice” 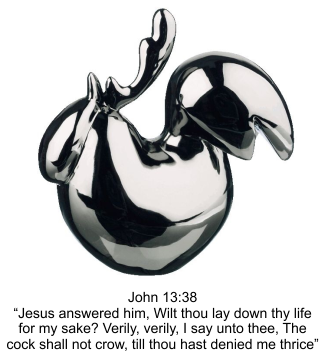 We have the Salt.

We have the Sulfur.

We see that there are eight Heads. What if we added a zero to that number?

Cool! We can all go home now.

Oh, if it were only that easy.

If that seemed a little like cheating, you're probably right.

Although we made a pretty good case in connecting Mercury to the Fiery Flying Serpent, we really should walk circumspectly here and see if we can let Scripture reveal some more clues about this Eighth of the Seven and if he's related to Mercury...

We see that on the Heads are the name of Blasphemy. This is a very important clue.

"So he carried me away in the spirit into the wilderness: and I saw a woman sit upon a scarlet coloured beast, full of names of blasphemy, having seven heads and ten horns"

Could the Names of Blasphemy be related to Mercury and DNA?

Blasphemies are not only Words... but Words that slander, and speak profanely of sacred things.

Remember, the Genetically Engineered Image of the Beast will literally be Blasphemy made flesh.

Speaking of which... guess who Mercury is in Scripture?

"And they called Barnabas, Jupiter; and Paul, Mercurius, because he was the chief speaker"

Paul was thought of by the Lycaonians as being the God Mercury because he was the Chief Speaker.

Thus Mercury in the Bible represents a "God of Words" and "Messenger"...

Definition #1: Hermes, the messenger and herald of the Greek gods, or rather the corresponding Lycaonian deity.

"Greet Asyncritus, Phlegon, Hermes, Patrobas, Hermas and the brethren with them"

Now we know that Mercury and Hermes are connected even in Scripture.

So far we have the Eighth of the Seven or "Little Horn" being a sort of 'Chief Speaker' like Paul, except the opposite... being filled with blasphemies.

"And spared not the old world, but saved Noah the eighth person, a preacher of righteousness, bringing in the flood upon the world of the ungodly"

Noah was the 'Eighth' and was 'of the Seven' when he boarded the Ark.

Notice how Noah was described...

"a preacher of righteousness"

In other words, he was the 'Chief Speaker'... the good version.

Why on Earth would the Bible go out of its way to show us that?

Here is another amazing clue...

"And they took Absalom, and cast him into a great pit in the wood, and laid a very great heap of stones upon him: and all Israel fled every one to his tent"

Of course we all know who else gets thrown in a pit...

"And he laid hold on the dragon, that old serpent, which is the Devil, and Satan, and bound him a thousand years, And cast him into the bottomless pit, and shut him up, and set a seal upon him, that he should deceive the nations no more, till the thousand years should be fulfilled: and after that he must be loosed a little season"

“Most scholars derive "Hermes" from Greek ρμα herma, "prop, heap of stones, boundary marker", from which the word hermai ("boundary markers dedicated to Hermes as a god of travelers") also derives”

Interestingly, the Hebrew word for Heap comes from Galal which sounds an awful lot like Gallus, the Rooster.

Think of Heap of Stones as Nucleobases, chained along a strand of RNA...

Try doing a study of Heap of Stones in Scripture. You will be amazed at what you find. 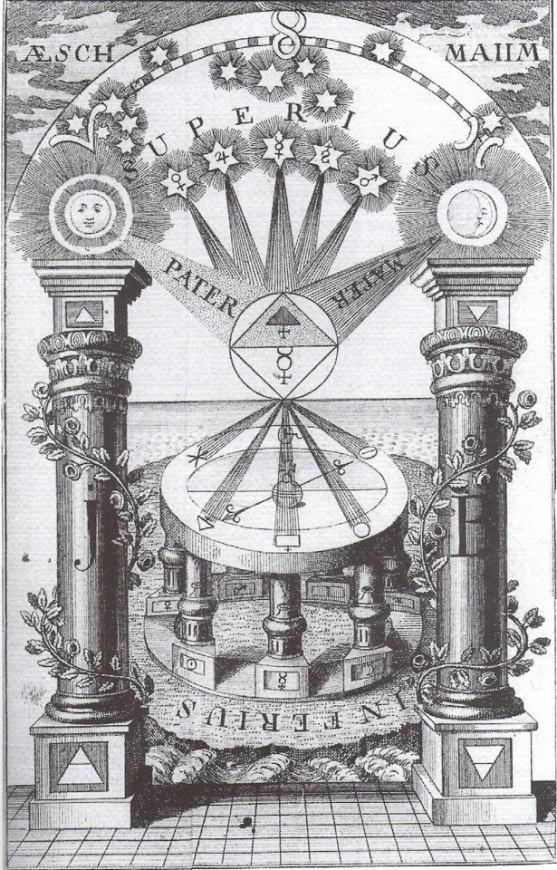 Well that sure was a lot of work.

Hopefully that Sea Beast won’t lose an eye or something.

"Woe to the idol shepherd that leaveth the flock! the sword shall be upon his arm, and upon his right eye: his arm shall be clean dried up, and his right eye shall be utterly darkened" 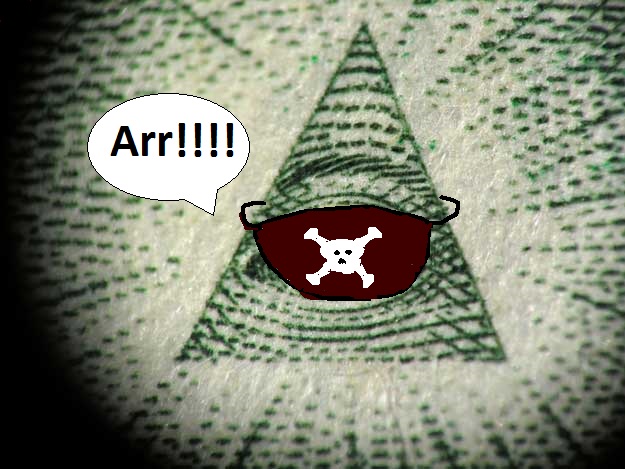 That would make Fifteen Eyes. I wonder what Element 15 is?

Carbon, 666 and the Mark of the Beast