“Give us this day our daily bread” 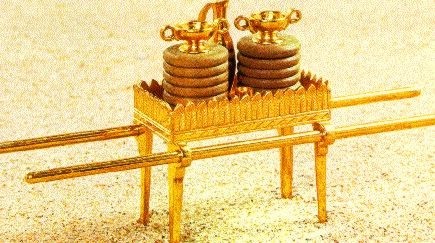 This one should be obvious.

Simple and to the point.

There are twelve loaves... representing the Twelve Tribes… which is a hint of a future DNA upgrade when our ‘Stones of Fire’ are replaced by ‘Pearly Gates’…

“And the devil said unto him, If thou be the Son of God, command this stone that it be made bread”

“And Jesus answered him, saying, It is written, That man shall not live by bread alone, but by every word of God”

Our next item is the Altar of Incense… 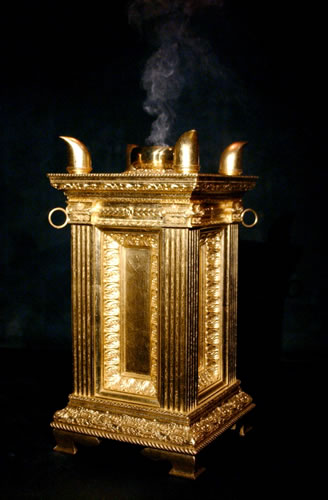 As the name suggests, incense was burned on this altar.

The coals used on this altar had to be taken from the Altar of Burnt Offerings which we learned about earlier.

“And the smoke of the incense, which came with the prayers of the saints, ascended up before God out of the angel's hand”

“And he shall put the incense upon the fire before the LORD, that the cloud of the incense may cover the mercy seat that is upon the testimony, that he die not”

As far as how this related to DNA and Cell Biology… more research is needed on my part.

Here we see Uzziaha, a King, break the Law and enter the Tabernacle to burn incense…

"But when he was strong, his heart was lifted up to his destruction: for he transgressed against the LORD his God, and went into the temple of the LORD to burn incense upon the altar of incense"

The Priests tried to stop him, but the King was too stubborn. Then something terrible happened…

"And Azariah the chief priest, and all the priests, looked upon him, and, behold, he was leprous in his forehead, and they thrust him out from thence; yea, himself hasted also to go out, because the LORD had smitten him”

Leprousy had formed on his forehead. This is a foreshadowing of the Mark of the Beast…

“And he causeth all, both small and great, rich and poor, free and bond, to receive a mark in their right hand, or in their foreheads”

The Mark of the Beast is opposite to the Seal of God and the Holy Ghost.

Those that gain victory…

Could this Sea of Glass be related to Cytoplasm? Cytoplasm is what fills the Cells in our bodies.

“And the temple was filled with smoke from the glory of God, and from his power; and no man was able to enter into the temple, till the seven plagues of the seven angels were fulfilled”

What could this Glory and Power be that fills the Tabernacle Cell?